A year before my own High School graduation, we received yearbooks with the wills written by all the then seniors. Taking apart the bullshit, the cliche and the falsehood that everyone wrote about loving the school, teachers and student body, I found an interesting quote on my good friend's will:


Let's bring out our critical eyes here - smartass statement or truthful opinion of his part? In several ways, this is true.
Education at an early stage is taken by schoolteachers, and there's an evident relationship between investment in education and progress of a country. South Korea did it, and went from being miserable to an enviable country. So clearly education is important, but that's a given. The real question is concerning the people in charge of that.

Think about for a second: just how much do we need teachers? I'm not starting an argument here - there's the whole rest of the internet for that. All I'm saying is that there are plenty of other fair sources of knowledge in modern times, and most are faster, more accessible and snappier than Mrs Smith or Mr Jones at 4th grade. I guess don't need to introduce Mr Wikipedia for you, but I may need to explain why the word "better" wasn't included before.

Let's think of the word "teacher," etymologically. It means "somebody who teaches." So, if Gary the Janitor tells me that life is bullshit, that you should drink it up instead of studying, and I take that as truth, then Gary the Janitor has just played my teacher. But see, Gary didn't have to go to college for that - and I doubt that he even finished High School himself. Yet he still was able to make my mind, he was able to teach me. Now, was Gary the Janitor a better teacher than Mr Vanderpool, who was crucial in making me choose an Engineering major? I doubt. The problem is that you can change "Gary the Janitor" with the name of any teacher you've had and realize that the quality of his/her teachings is subjective and doesn't even matter in the end.

Today, a schoolteacher of any grade has to have at least college-level education to exert the profession. This, if you still don't realize it, is a LOT of preparation. Regardless of what subject you intend to teach, you will have to go through four years of receiving immense ammounts of knowledge in order to become somebody that will be able to tell consistent things about anything you're asked. And yet, after all this stress, you'll end up being paid just about same as an ordinary job that did not require college to begin with. Has the drama sunk in yet?

I guess that means we really need teachers then. We need them to teach the kids what not to do in life. We need teachers to show children what an underpaid and under-appreciated job looks like. I see teachers much like philosophers; they know everything and how to change the world, but in reality are powerless on how to spread the word. I'm pretty sure that most of Greece did not give a shit to what Plato said about existence. If what your first grade teacher said to Johnny the Bully was really valid, he wouldn't be shanking old people for drugs today. Maybe, then, it's not about the one doing the teaching, but the ones receiving instead? 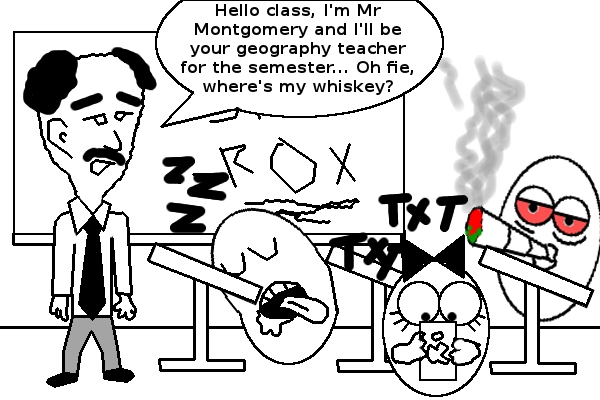 I see professors as only slightly more respected than teachers, in the context that their audience is generally mature and knows they need to pass the class. Teachers, on the other hand, are under the mercy of how interested their students are - because if too many fail the class, it's the teacher who gets fired. So if you are in front of a classroom full of dipshits zoning out, you pretty much have to bite the bullet. Your crusade to enlighten your pupils will just go as far as your paychecks allow you to. And to top it off nicely, the parents' opinion on the teacher's habits. Just what the fuck you would expect of an underpaid and under-appreciated worker: that he sees a psychologist and meditates daily to cope with his unbearable amounts of stress? Fuck no, he drinks and slaps hookers for a reason more than solid.

On the light of the above, here's my correction to my friend's will:

TO THE TEACHERS: the world only needs you in part. Get off your asses and do something useful. Education is not all useless, just in the sense that you are not completely useless either. But pushing pens and fabricating 'A's to look good is not what your job is meant to do. Go ahead and pass on something to these brats. Show them what is right and share your point of view. There's a lot of bias still living in this world and it is no less than YOUR JOB to destroy it. Go get'em, tiger.
courtesy of Klaus Zimmermann is not my real name