Computers suck and you should smash yours right now

Got a computer? Wanna know how to make the best of it? It's simpler than you'd think. Just look around the room for a bat/hammer or similar blunt object,aim square in the middle and smash its shit to ruins! Bonus points for a laptop/netbook/whateverthefuckitis; all it takes is throwing outta the window or into the floor, preferably of concrete.

The surprising catchiness of this title hints one thing I've concluded lately, after thorough surfing and time wasted in the internet: computers are, without exception, useless. Surprised? Pay close attention to the explanation, grasshopper, and you shall be enlightened too.

keep reading...
courtesy of Klaus Zimmermann is not my real name 7 comments:

Languages are like fingers, but Attitude is the Hand.

Every non-american or non-british elementary school student has been told about the importance of learning English to succeed in their careers. Learn English, do Business and stuff your guts with munny. The problem is that this was true maybe ten years ago. Today it's like English is already basic, the real money is in learning one of other 5 languages that only one or two countries speak, and putting all your eggs in that basket. Italian, German, Chinese, Arabic... the list goes on. But even if you mastered all of them, if you don't have English to begin with, guess what? You lost the game and will work at McDonald's until you die.

As a bilingual student myself trying to turn trilingual, it's no surprise that I've been hammered on with such ideals. "Go do your English homework, boy." "You finished? Off to practice the Japanese vocabulary you go, then!"

One reason why Wikipedia sucks...

I will summarize this entire post in one word: SATURATION.

That's it. If you came here just out of curiosity due to the catchy title, you are now free to go back to your surfing.

Still reading? I guess I have to do some justification of my part. While I am a strong supporter Wikipedia and its open content initiatives, there is still one big issue in there that I cannot get over. HINT: The lines above were a protest in respect to it.

keep reading...
courtesy of Klaus Zimmermann is not my real name 2 comments:

Tibia is a great Game if you're a retard!

It is widely said that big things come in small packages. You probably heard it in some perfume store talk, as a means to justify paying a humble fortune for a volume of perfume smaller than a shot glass. Or maybe you said it yourself when your girlfriend complained about the size of the chocolate box you gave her. The only problem is that this sentence is a cowardish way of getting away with anything you wish. Oh, so the work I've done is way beyond the minimum? Can't fire me - big things come in small packages, yo! Fuck that.

Back in early 2000's, MMORPGs started to bloom. Everyone was into Ragnarok, looking for free servers, leveling their characters for big war events and recently-released Warcraft 3 was tiptoeing towards becoming an RPG itself. There was actually a wide range of games to choose from for the first time ever, like a golden age of MMORPGaming. Good ol' days.

And then there was Tibia, the oddball,

keep reading...
courtesy of Klaus Zimmermann is not my real name 6 comments:

The internet still is the fairest place in the world

The internet has done a great job connecting virtually every single individual on the planet with or without their consent. While this same fact spawns some millions of realistic blog entries on why this represents a security threat to both user and government levels, many people still fail to recognize why and how the internet is still playing for the good guys, even after all its zillion flaws are considered.

Despite the fair leveling of communication means and common access to knowledge proported by the internet, people (mostly bloggers, stupid reporters and newly conceived netizens) still point out the same damn insignificant bad points of the internet. They regard minor, unnecessary things such as "trolling" as a major issue that needs immediate repair. I'm pissed beyond belief everytime that an internet argument is given so much attention that it ends up at the TV screens of some minor channel, that regards it as one of the "dangers" of the internet. Wow. So, nothing to worry about sexual predators lurking around chat rooms, huh? And those scammers, sending phishing e-mails and all, they're pretty inoffensive, right?

One thing that (still) sucks about Linux 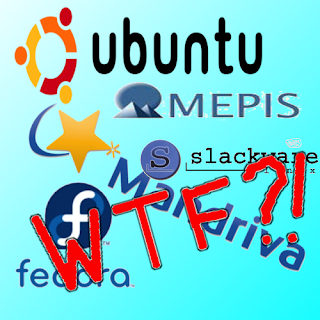 One of the harder things in life is to be able to criticize what you love. But everybody is to do that at some point in their lives, so I figured out it'd be sooner or later that I'd get do do it. So here I am doing this critique of one aspect that still sucks big time in most of the Linux distributions today: names.