5 Shitty reasons to use Linux


This post is not about the bashing of Linux, or why you shouldn't use it. It is, however, about weak or otherwise vague reasons that a few Linux "users" give when asked why they chose it. As you read on, take a minute and reexamine your timeline of Linux usage, and see if any of these apply - you may wanna rethink them. If you're an aspiring Linux user, ask yourself why you wanna use it. If your answer contains any of these, I'm not saying that Linux isn't for you, but rather that you can't bitch about it later when you start using.


"I'll become a hacker if I use Linux for long enough."

The fact that many hackers, security experts and crackers (you know, the ones that the FBI arrest) use Linux doesn't correlate at all to Linux being a school of hacking. Linux, if anything, dominates the server world, and I'm damn sure that their administrators don't spend their free time peeking into their neighbors' machines. Hell, if that was true we would even see grandmas "pwning noobs" in their Ubuntu machines.

And then come the people who claim that the best penetration testing tools are available for Linux, pointing that the fine BackTrack distribution is used even by the FBI. Hello? How many of these were also ported to Windows? And besides, you said it yourself: penetration testing tools. TOOLS. They are not a magical way to root your ex-girlfriend's computer and steal her pictures - you need time and effort to learn them, and even more to actually get to use them. And obviously a shitload more after that, when you do your sentence in jail.


Doing it right: I'll can become a hacker if I use Linux study computer science for long enough.


"Using Linux and Free Software is the first step in my way to become a communist!"
(NOTE: I'm not taking sides with any political views here)

Don't laugh, I've heard this one many times before. The only thing I can say is this: you wish. Regardless of whether Communism is a superior view or not, using Linux won't help you shit in achieving it. Oh, so you're talking community? Sharing of software? Equality of production means, since anyone can have it? No private property? Guess what; that's not Communism; it's Socialism. Actually, it's not even that - it's the ideals of Scientific Research. People working together and sharing the results for discoveries that will benefit all of them. 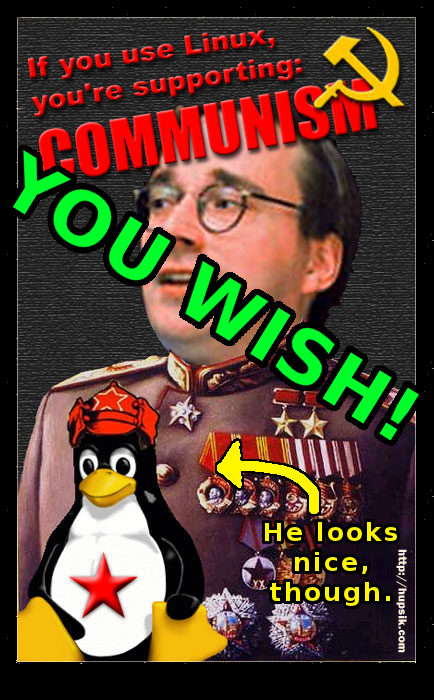 Also, what's with this thing of associating Linux to Communism? It began as an American project, joined later by a Finnish Computer Scientist (look up the historical relations between Finland and Russia). And no, the fact that the Linux Kernel was introduced four months before the collapse of the Soviet Union doesn't make it an attempt to spread communism unbeknownst. Fuck your conspiracy theories. There are many things you can do to preach communism - using Linux isn't one.

Doing it right: Using Linux and Free Software Moving to Cuba is the first step in my way to become a communist!


"Linux is Open Source, so I can easily debug and modify it anytime I need to."

I can't believe how widespread and bogus this belief is. It's powerful enough to lure a dissatisfied Windows user into the Linux pool, but the bad news is that this same user will go back to Windows later on, hating Linux forever. Imagine that Joe, average Windows XP user, catches a virus and that's his last straw with Windows.

Joe decides to use Linux, promised of power use, and the openness of programming, which he reads that gives its users the freedom to modify the programs as they wish. Joe doesn't think twice and downloads Linux, only to find out that:
Now, replace "Joe" with your name, and re-read the previous paragraph. Does it sound like a likely situation you'd be in? That's because it is. Average users cannot appreciate the concept of "Open Source" simply because they lack the ability to manage the Source. Unless you are an experienced developer, this reason is void.

Doing it right: Linux is Open Source Free, so I can easily debug and modify it anytime I need to use it for free.

It's true that Linux is a more secure OS than Windows, and that Wine does not "open a door" to malware/hackers by emulating it. The fallacy here is to think that gaming in Linux is of comparable performance to that of Windows. Short answer: it only is if you have the time, money and hardware to spend optimizing it. You can read the rest here. So yeah, the latter part of the claim is valid, but the gaming experience is always a mystery.

I am not saying that wine sucks. There are simply too many weak points where native Windows programs can fail in Linux/X11. Drivers for video cards, for example, are often not well-coded. A few DLLs may be missing, or not available in some version of wine. Or maybe the game you want to run was developed by idiots, and will not run no matter what. What you gonna do about it?

Doing it right: I can play flash games in Linux through Wine without worrying about damaging my system or getting hacked

This is only true if you're willing to give up the following, among others:
If not, you just won't. You'll still eat Microsoft's shitcakes. Chap from work sent you "the funniest slideshow?" Microsoft-made! Boss needs you to make that report ASAP? Microsoft-made! Playing Call of Duty through wine? Microsoft API! Even some pages on the internet are powered by a Windows server, which explains the large amount of errors you get from them.

By the way, if you're wondering what is Compiz doing there, get this: Novell started the Compiz project, together with XGL, and look where they are now.

Doing it right: I will be free from using Windows Microsoft's wrath when I start using Linux

So there you have it: Five shitty, invalid and bogus reasons that you should never use as an excuse to justify the use of Linux over other Operating Systems.
But of course, there are the noble ones too. Maybe I'll put those in another post.

February 2012 by K. Zimmermann
Contact me.
courtesy of Klaus Zimmermann is not my real name