How to win any argument against a Mac or Windows user

The last thing the Internet needs is more flame wars. It looks like everything that has a comment box is flaming just waiting to happen. I figured that it's about damn time that someone steps in to save the Internet, and that no one else is better suited for the job than myself. So, in order to stop the web from collapsing over its own fanboyism, I will teach you all how to dismantle and eliminate any flame war that you may face from now on. After reading this article, you too will be able to properly neutralize and serve any Mac or Windows fanboy you may face. Why I didn't mention Linux, you ask? Because, obviously, there is no such thing as a Linux fanboy.
Paid Operating System fanboys base their arguments on one dumb pillar. Can you guess which one is it?


The correct answer is 4. Yes, ladies and gentlemen, behold the truth of how OS fanboys work. If you never saw a forum where this kind of claim is made, here's a quick example from Reddit;


"I've always really wanted to like Linux. But the fact it can't easily run the most popular software and games, removes any and all usefullness.
It really ends up being an operating system for computer-hipsters and more for bragging rights then anything else. [...]"


"Any and all  usefulness." Yep, you heard the man! According to our truthful Dipshit, Linux has ZERO uses because it's meant for serious people (you know, that grew up and actually know how to use the computer instead of just playing retarded MMORPGS) and it does not run two or three pieces of software for which the alternatives are better anyway. Great job, fucktard! Next time, why don't you just smash all the computers in the school's Mac Lab since they can't run Starcraft?

Now that you've seen their argument, allow me to show the solution. Ready?


Done. Two words that will leave them completely clueless as to what to do next. The great problem with the fanboys is that they think that things in life are binary; you can only accept one and must completely eliminate the other from your life. Hence, if your operating system can't do one thing or another, it serves no purpose and deserves to be thrown in the trash.

Truth is, however, that last time I checked, most things in life are not binary (at least not the good ones): 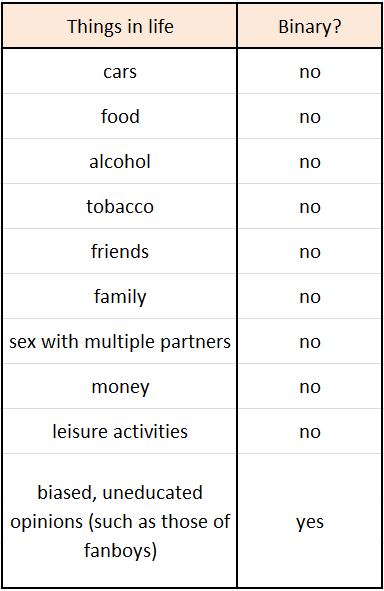 I call QED here. There is nothing wrong in dual booting, and as a matter of fact, you can only win in doing so. Wanna play your stupid World of Warcraft? Windows is just next door. Feel like getting back to the real world? Boot into Linux. I can't find any valid reason on why fanboys don't accept multiboot. Linux isn't looking for competition, and it won't care about being a secondary OS either. It's like the less-known artists in the media; who cares if a couple of people don't like your work, when in reality it's much better than the mainstream crap they listen to?


There you have it, the fail-proof way of winning any argument against Mac or Windows users. Dual boot, or die.