Linus Torvalds is a douche.


Linus Torvalds is a douche. There, I said it. And in doing so, I did what 20 million other people were too much of a pussy to do. The number one tabboo in the Linux world has just been stomped on, and by no less than a devoted Linux user himself. Linus Torvalds may be seen as a hero by many, mostly wet-pussied fanboys who still think that the ultimate goal in life is to become a Virtual Che Guevara and ditch "Micro$oft." However, I've seen, heard and read enough about him to conclude that despite his contributions, Linus Torvalds is an arrogant and narrow-minded prick. 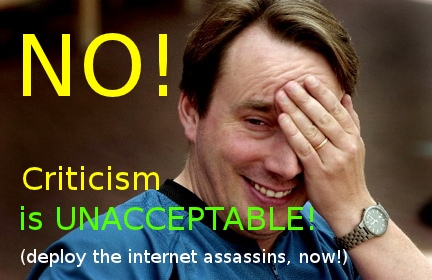 I don't feel any hatred towards the Linux Foundation, Kernel or the GNU-adjointed family of Operating Systems. In fact, I think they all kick a large amount of ass. I do think, however, that the major reason for the ass-kickery is due to the works of the Linux community, not the original author himself. Hell, what good has he done since like... Linux 2.2? That's quantity pwning your quality, bitch! Kernels 2.4 and lower can run on a raw potato thanks to who? That's right, the Kernel engineers worldwide!
As Linus himself admits:

Yeah, so long for your POSIX-compliant days ain't it, moron? Call it a movement, we can even make a movie out of it. "The virtual invasion of the free and brave;" I could make millions out of a catchy title such as this one...

If you're curious as to exactly why I think Linus Torvalds is a douche, here are a few, but significant, points that pissed me off:

He still thinks like a Computer Science student from the nineties:
For Linus Torvalds, a computer is composed of a Rig (cream or white color), CRT Monitor, old-ass IBM-style keyboard with high keys, and a WIMP interface composed of desktop icons, launcher panel and menu - all of which must be completely accessible by a mouse. For this reason, here are a few of the good things in Linux that he has ditched in protest:
-KDE (after version 4.0)
-GNOME (after version 2.3x)
-Anything that has a non-WIMP design, or comsumes more than 128MB of RAM.
-Productive eye candy, such as Compiz

He is a narrow-minded prick that can't take any alternative methods or philosofies as constructive:
One good thing that Linus has come up with (besides his Kernel) is the idea of a silent operating system. This means that the users won't be able to ever notice the operating system that lays beneath his/her shell because it would be processing the work as efficiently as possible (without errors and shit). However, I can't think of anything else that is great about him. He is a narrow minded prick that can't take other people's ideas if they don't agree with his standards. As an example, here's what he has to say about the C++ programming language and one of his only reasons to use the C language instead:


" C++ is a horrible language. It's made more horrible by the fact that a lot of substandard programmers use it, to the point where it's much much easier to generate total and utter crap with it. Quite frankly, even if the choice of C were to do *nothing* but keep the C++ programmers out, that in itself would be a huge reason to use C. "


Don't believe me? See with your own eyes here. Yes, behold the (partial) creator of Linux mercilessly bashing other users into believing that his biased opinion is clearly the best around. Among other names, I call this kind of behavior "trolling."


Now, I will go ahead and admit that I am no uber hacker, I just know a few more languages than you. Yet, even that being the case, I'm still able to recognize and justify that Linus Torvalds is a self-absorbed troll who thinks that his 2.5% market share (that's lower than the iPhone share) Operating System usage is enough to justify his non-educated and narrow-minded remarks.

Now, to finish this nicely, here is my advice to Mr Torvalds:

Sit with your thumb up your ass and do not remove it until you completely and sincerely accept criticism and other people's ideas into your projects. Oh wait, that's right, they're not yours anymore.

So long, bitch. Be thankful that I didn't become a BSD Zealot myself.

Contact me.
courtesy of Klaus Zimmermann is not my real name