Computers suck and you should smash yours right now

Got a computer? Wanna know how to make the best of it? It's simpler than you'd think. Just look around the room for a bat/hammer or similar blunt object,aim square in the middle and smash its shit to ruins! Bonus points for a laptop/netbook/whateverthefuckitis; all it takes is throwing outta the window or into the floor, preferably of concrete.

The surprising catchiness of this title hints one thing I've concluded lately, after thorough surfing and time wasted in the internet: computers are, without exception, useless. Surprised? Pay close attention to the explanation, grasshopper, and you shall be enlightened too.

Evidence from the internet indicates that no computer in the world is able to fulfill the infinite task demands of a spoiled bitch-ass homo sapiens individual. No Rig, no Operating System, no godlike programmer, nothing. They all fail to completely satisfy the needs of the 13-year-old x-fanboy - where x is replaceable with whatever category related to computing. And with further evidence kindly provided by the internet best place in the world, since the 13-year-old pieces of shit are not satisfied by todays computers, these obviously suck and deserve to be destroyed along with their creators.


GET IT RIGHT, MOTHERFUCKER.


According to Creationism, Fanboys were conceived in the seventh day, right after God had decided that it was about damn time to invent "the shits," following His thirty-seventh chili burrito of the day. And since then, that's exactly what Fanboyism has been about: born from shit, and dying as a piece of shit. So in the end you too know what good they are in the internet - just about as useful as the trolls. A Fanboy with a computer can only mean one thing: wasted bandwidth.

Not only fanboy A or fangirl B will bitch about insignificant aspects of Operating Systems that nobody with a life will ever care, they also will cowardly remove themselves from the critique spectrum by not taking any sides with OSs. WHat a heroic, manly, applaudable act: you flame a community then run away, stating that you don't care since computers suck anyway. 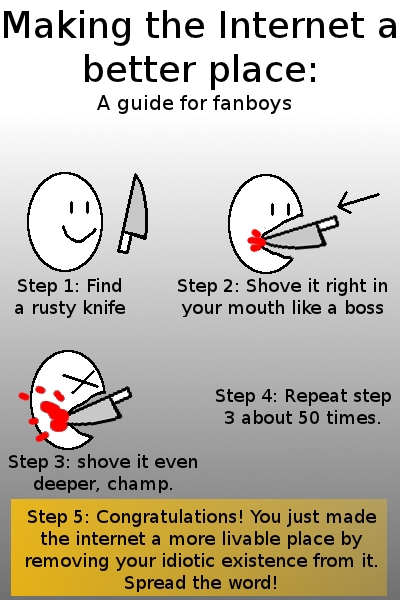 The most ironical aspect of this ongoing flame war is that it's direct consequence is the Computer Hipster Code.
Basically, it states that the more mainstream your system is, the more it sucks. Then it follows that obviously Internet Explorer is the worst browser because the majority uses it, and if you want to be really h4x0r you have to use Opera, Maxthon and all that other shit that no one has ever heard of. Yeah, now you're surfing with power! Dipshits...
Forget about logic on this one! It's some Hipster shit - nonsense, stupid and PBR.

So what are you waiting for? I'm pretty sure there's a window around you nearby.