The internet still is the fairest place in the world

The internet has done a great job connecting virtually every single individual on the planet with or without their consent. While this same fact spawns some millions of realistic blog entries on why this represents a security threat to both user and government levels, many people still fail to recognize why and how the internet is still playing for the good guys, even after all its zillion flaws are considered.

Despite the fair leveling of communication means and common access to knowledge proported by the internet, people (mostly bloggers, stupid reporters and newly conceived netizens) still point out the same damn insignificant bad points of the internet. They regard minor, unnecessary things such as "trolling" as a major issue that needs immediate repair. I'm pissed beyond belief everytime that an internet argument is given so much attention that it ends up at the TV screens of some minor channel, that regards it as one of the "dangers" of the internet. Wow. So, nothing to worry about sexual predators lurking around chat rooms, huh? And those scammers, sending phishing e-mails and all, they're pretty inoffensive, right?


Issues that are bloated by the media are ultimately pointless. I can survive some waves of trolling if that's the case. I came to the conclusion that what them internetlings really need is a lesson, a crash course on why the internet is not the horrible nightmare the media makes, but rather a pretty awesome place, should you know exactly what to and not to do.

That's right, nothing beats it. I pay $40 for a cell phone plan including unlimited internet usage. That is to say: talking, texting AND surfing for $40. And that's the crappiest service around. Broadband is almost as cheap, and you can use for truly whatever you want, your e-mails/VoIP/IM services all in the bag. Now, just imagine what if you had to give all that shit up, and go back to the postal service and expensive-ass telephone rates? Yup, thought so.

If you are smart enough not to use windows, you might have been in a situation in which the software you're looking for wasn't available for your platform. We all know that sucks, right?
Well, turns out that the internet works in such way that most browsers became equally capable, at least core-wise. What that means is that any content released in the internet will work for anyone with a browser. And since no operating system ships without a browser, EVERYONE without exception can enjoy the same content in the internet.
That's the main reason why I prioritize web applets to downloadable programs.

3.It's the greatest source of knowledge. Greater than all your professors together.

Because it IS all your professors together plus a bunch more others. Ever thought of looking up something completely random/useless? The internet has an answer. Your professors? I don't think so.

4.Trolling and the shallow bedlam act like Natural Selection

I actually like the work of trolls. They are like web predators, waiting on naive users. This way, the entire community evolves together. "Weak" users are eventually chased away from the internet or learn from their mistakes. And the trolls have a nice laugh. The internet evolves into a place where everyone is more mature.
This may not apply to that piece of shit 4chan, though. Nah, definitely not. 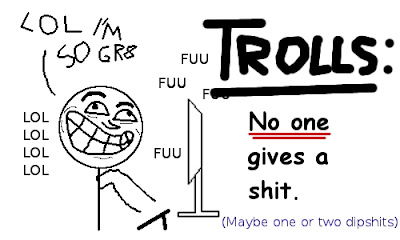 That's right, every decent internet user what trolls are for.

That's right. I have as much power as the president, the officers at the armed forces and your entire country as long as I'm in the internet.
How?
Anonymity, trolling and being smart. That's it. I can hereby proclaim myself as the king of the whole browsable internet, just because I feel like. Now, what the rest of the people think of it is open for discussion. 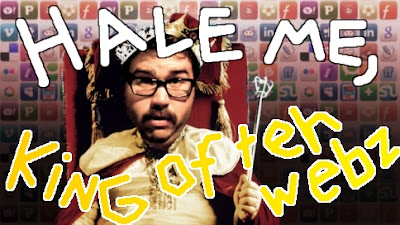 The picture above is an accurate description of 90% of the dipshits that call themselves "netizens." True story.

So those are the most obvious reasons. As good ol' troll David Thorne would say, "The internet is a playground." You just have to learn to deal with it. Like a bunch of children in a playground; those who are offended and bullied by the others just have to deal with it or leave the place at once.
courtesy of Klaus Zimmermann is not my real name