Languages are like fingers, but Attitude is the Hand.

Every non-american or non-british elementary school student has been told about the importance of learning English to succeed in their careers. Learn English, do Business and stuff your guts with munny. The problem is that this was true maybe ten years ago. Today it's like English is already basic, the real money is in learning one of other 5 languages that only one or two countries speak, and putting all your eggs in that basket. Italian, German, Chinese, Arabic... the list goes on. But even if you mastered all of them, if you don't have English to begin with, guess what? You lost the game and will work at McDonald's until you die.

As a bilingual student myself trying to turn trilingual, it's no surprise that I've been hammered on with such ideals. "Go do your English homework, boy." "You finished? Off to practice the Japanese vocabulary you go, then!"

Fuckers. Have some self respect and respect for your country. It's like every kid back in school had to do it big in only one single way, and any other way they did it would be unnacceptable. Joey gets an A for coloring the sun yellow, but Huey gets an F for making it white. Only that in truth, sunlight is received as a mixture of colors, making it white by definition. But again, if all you want to do is educate businesspeople, then it doesn't matter if they don't do anything for their own country, right? I mean, it's my business and not anyone else's...

So let's imagine your average international student arriving for college in the United States. Having completed the requirements of language (and by that it's always and only the ToEFL) he then excitedly proceeds to unboard the plane and meet his new roommate, get to classes and all. However, in the preparation to pass the ToEFL, he forgot to actually practice his English and instead focused only on the passing aspects of the examination - and therefore found out he can't speak English at all!

What our poor international student has been through is a personification of the title of this post. Just how good are languages when you don't have the attitude to make them useful? What good will your Elementary Chinese vocabulary homework do to you if you completely ditch it after you hand it in? Fingers are not of much help when you don't have a hand to begin with. And that's what the vast majority of people that claim to be "bilingual" (here meaning 'I know 100 words of a second language') essentially are doing. They get a certificate saying they are proficient when in reality they're unable to make a casual conversation with them "gringos." 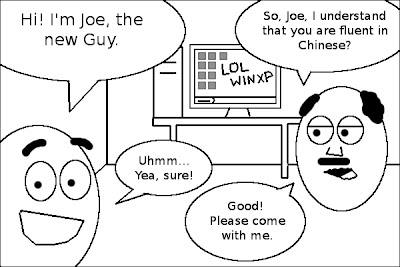 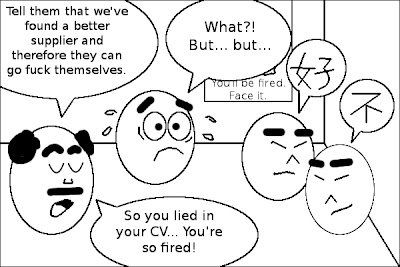 Languages are tools, means of accomplishment, and NOT the accomplishment itself. Get it right.
courtesy of Klaus Zimmermann is not my real name