One reason why Wikipedia sucks...

I will summarize this entire post in one word: SATURATION.

That's it. If you came here just out of curiosity due to the catchy title, you are now free to go back to your surfing.

Still reading? I guess I have to do some justification of my part. While I am a strong supporter Wikipedia and its open content initiatives, there is still one big issue in there that I cannot get over. HINT: The lines above were a protest in respect to it.

If you decide to look into an encyclopedia, it's because you either need to know something you don't know, or need to know more about something that you already know a little. Those being the cases, why not give the answer straight away? It's not like we're in for a lecture or asking grandpa about his days in the army. In fact, most of us don't look for such things for our own pleasure and free will. We want an answer to a question/problem that was asked us, and if we don't have it we're de facto screwed. Wikipedia does anything but help us when faced with such situation.

When, in the first line of the post, I summarized this whole thing into a word, I did what the entire collection of the Wikipedia is unable to do: give a simple and straightforward answer without adding irrelevant side details to confuse people.

Due to its open content and accessibility policies, Wikipedia has become a bloated website where you waste 80% of your time in order to obtain 20% of what you expected to find. It sounds pretty stupid when you stop and think of it, but this issue goes by completely unnoticed. What this means is that when you look up something stupid such as "balloon," what you get is a labyrinth of information that is ultimately useless as to what you wanted to find. 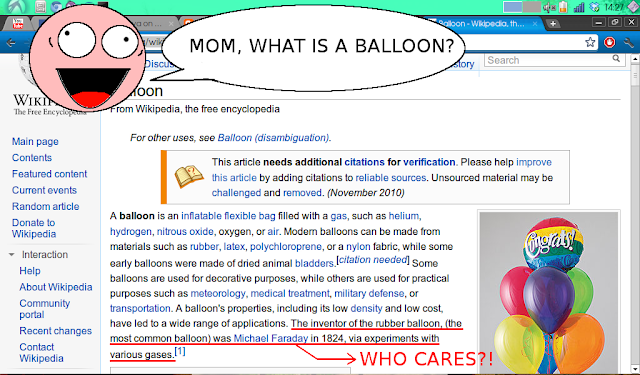 I'm not quite done with my point.
The gymnastics you need to perform in order to filter the useful from the irrelevant not only consume time and money, but also ultimately destroy the point of having to look into an encyclopedia in first place. True, there are complex concepts that cannot be conceived into one or two sentences (let alone a whole article, if you're talking about string theory) and rightfully get their lengthy paragraphs. But you won't stumble upon these unless you've seen them before, and seek deeper understanding.

The presence of the labyrinth of data ultimately kills the point of looking them up, because chances are that you will end up even more confused than before. Wikipedia, then, committed suicide because now you cannot find useful information about something without having complete understanding of it in first place.

How can we make Wikipedia a better site?

SKIPPING TO THE GODDAMN POINT!
courtesy of Klaus Zimmermann is not my real name