Internships are some serious shit

I read somewhere last semester about the common disappointment and disheartenment of college students who venture themselves into their first Internships, just to find out that it's not what they thought, it's boring and if that's what real work looks like, that they might as well drop the major and do something else.

The article pointed out a couple of interns for whom the above happened not to be true and how much their "alternative" uber-hipster internships rocked. The first sentence was something like "So when you hear 'internship,' what do you think? A bunch of college students pretending to be busy going around making coffee for their bosses? Think again! [...]"

The sad thing about this thesis statement is that it's true. You know it too. Think about an intern in an office, his/her third day into the shift. I statistically know that 95% of you projected the following image in your mind: 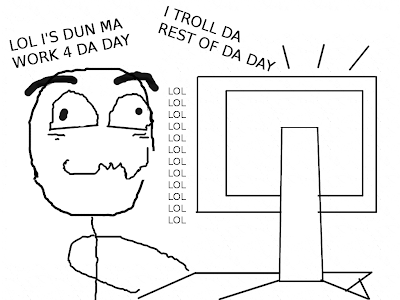 The remaining 5% are what I call retarded daydreamers.

I have a rebuttal to the given statistic, though. After two months of thorough work in this tiny, yet cozy and delightful office, I've experienced enough to believe that my internship was beyond the standard model, and indeed I did more than just coffee to my supervisors. Don't take just my word for it, I'll let you see it for yourself. This is my desktop (the windows one, viewed from KNOPPIX). Outside the 'x' boundary are anything other than spreadsheet documents. Inside the 'x' boundary there is a 50-page excel file authored by me, containing all the budget of the company.

Oooh yeeeah... all your budget are belong to me. Internship is serious shit and haters better step the fuck out. Of course, you may think that every single thing other than that single omnipotent spreadsheet is not exactly work-related. In my defense, I'll say that even in my impossibly busy internship one would require some passtime. Jeez, what's so bad about a binary file downloaded from a not so known source in the internet? Quit bitching already (talking to you, IT buddy!)
My download folder is not even that messy...

Yea. Work's hard, and so is life. And an internship is between those two, slightly upshifted. Now let me post this entry already and flame some vegetarian forums.
courtesy of Klaus Zimmermann is not my real name

Email ThisBlogThis!Share to TwitterShare to FacebookShare to Pinterest
Tagz: trolling