SliTaz is awesome. I've used it in the past during its 3.0 days, and since then I already found it fascinating. If you haven't heard of it, here's a short description of the distribution, provided by their website:

SliTaz GNU/Linux is a free operating system working completely in memory from removeable media such as a cdrom or USB key. It is light, speedy and fully installable on a hard drive


Sounds familiar? That's because Slitaz belongs to the minimalist family of Linux distros, which Puppy Linux and Damn Small Linux are part of. Slitaz is a tiny ISO (~30MB) and loads into RAM on boot, making the Live session about as fast as a hard drive install. Although other distros could do the same, usually they're too big to fit completely. Slitaz, on the other hand, is small enough to fit even in 128MB of memory, making it the right match for that old computer sitting in the basement.

Slitaz 4.0 was released on April 10th, and I promptly downloaded it. Finding that no one (at least in Distrowatch) ever reviewed it, I thought I'd show my appreciation for this distribution and do it:

The link above takes you to the "Stable LiveCD" download, which should be the one you're looking for, right? Well, as soon as I got and checked the sum for slitaz-4.0.iso, I proceeded to burn it to a USB stick, just to realize that it wouldn't boot. I didn't feel like using one 700MB CD for something less than 100MB in size, but neither Unetbootin or dd would produce a bootable medium: the stick would invariably encounter a kernel panic, leaving me to reboot. So, after about half an hour trying to crack it, I gave up and looked for help.

The Slitaz IRC proved to be quite helpful in spite of its popularity, and the answer came as downloading a different image. The standard one is a "4-in-1" image that reportedly caused problems when written to a USB, so I would have to find another one. Doing that, however, proved to be trickier than I thought. There are no clickable links pointing to the index of the page, so you'd have to find it manually. Don't worry, here it is for you. Unfortunately, the index itself is also quite crowded, but I found the slitaz-4.0-core.iso image to boot fine. So, after burning it to the stick, we're finally greeted with a nice boot screen: 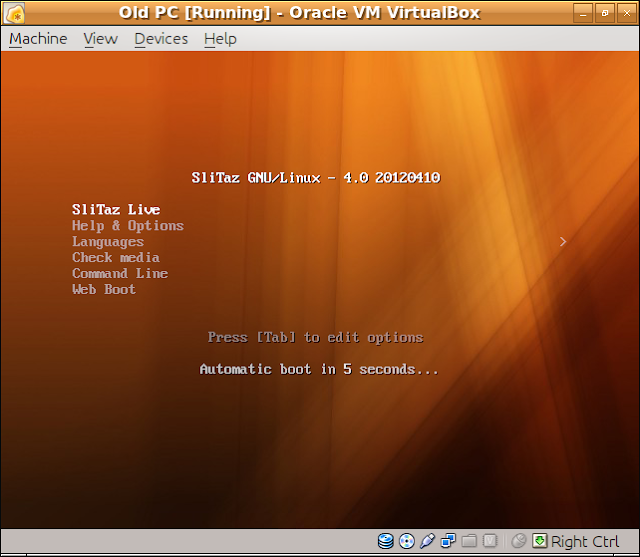 There are the standard options plus CLI only boot, but an interesting feature is the last one: Web Boot. I read about it in its testing days, and apparently since the image is so small, it's possible to download an even tinier image just to boot, and let the rest of the process be downloaded from the Internet. Yes, the OS can be booted wirelessly. I didn't try it, though, as I had the full image right there. 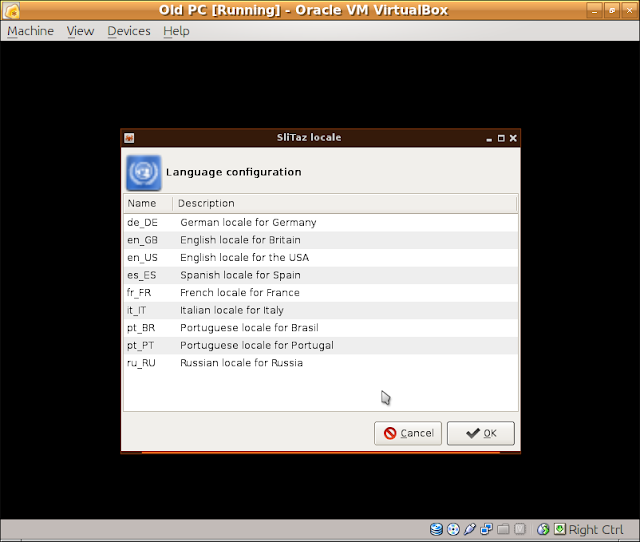 After answering two dialogues prompting the user to pick a locale and keyboard layout, we're presented with a GNOME3-looking two-panel desktop: 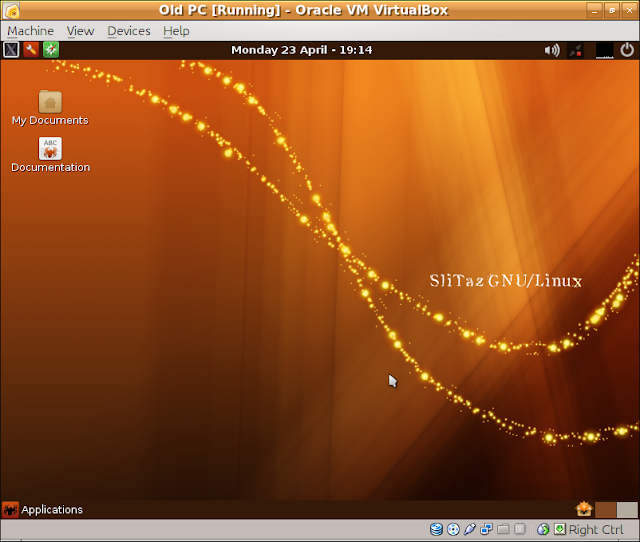 Distrowatch lists Slitaz as having "Openbox" as its default desktop. It turns out that it could easily be labeled "LXDE" instead, since it also uses lxpanel and pcmanfm as well to display the desktop. The layout resembles GNOME3's fallback mode, with the clock displayed in the middle of the upper panel and logout options in the upper-right. The wallpaper is simple but elegant.

A huge upgrade from the previous versions, in my opinion, was the merging of all configuration tools into one, tazpanel, which can be found in the upper-left corner. There's something frustrating about not being able to find what you want, and a few times in KDE this happened to me. Tazpanel, however, has everything you need wrapped-up nicely in a graphical app.

This is not the best wireless setup wizard I've seen around, but it worked fine in my encrypted network. Also, some parts of tazpanel, especially networking, are just an embedded text editor to edit the configuration files and reload - not exactly what you would expect in a graphical app. However, tazpanel still solves the problem of scattered options; you can do anything from setting up wifi to performing a frugal install using this one app.

Minimalist distributions tend to be thin on the variety of applications, and Slitaz is no exception to this rule. It has rich Internet applications as you would expect, including a web server with SSH capabilities. The browser of choice is Midori, a webkit-based lightweight browser, but an image with Firefox preinstalled can be downloaded from the link above.


The thinnest side, however, has got to be Office apps. A glance in the menu shows no word or spreadsheet processors available, and the few applications inside this category are mostly viewers for pdf and images. Weird, since usually at least Abiword would come preinstalled for most lightweight distributions. You get a game of chess, which is alright compared to Puppy's Rubik's cube game, but wouldn't Solitaire or something be smaller (or at  least simpler without the AI)?


Well, as lacking as this category is I think it's made up by the package manager. With tazpanel, it's easy to look up a lacking app and install it, especially if you've used Synaptic before. Also, since the base system is so small, having another program installed in the memory won't slow down the system as much. 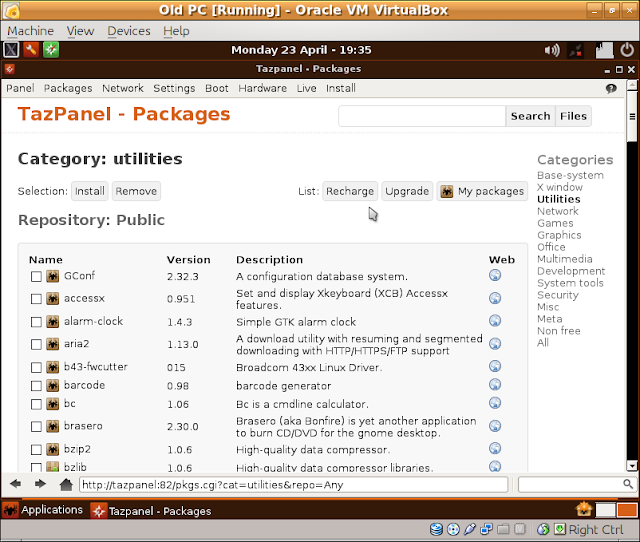 Here you can also download proprietary codecs and the flash plugin if you wish to use them while browsing. The process is as simple as searching, clicking and waiting. I was able to watch DVDs and YouTube without a crease. It's probably the best solution regarding a LiveCD, but installing a few lacking apps here and there did enrich my Slitaz experience significantly - at the cost of time spent. 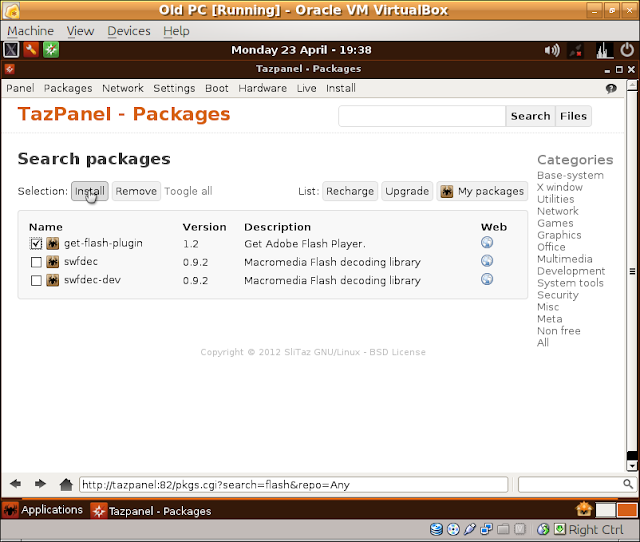 There two apps that are unique to this distribution: the Sakura Terminal emulator and the TazWeb browser. I don't know why the developers felt like coding their own terminal instead of using plain xterm, but Sakura does have its quirks, making it comparable to LXDE's lxterminal. TazWeb is a single-tab webkit browser, rendering in the same fashion as Midori. Though unfit as primary browser, it's used to display the documentation and is the window which runs Tazpanel. Frankly, I don't see much use or uniqueness in either app, but some further development could yield interesting results.

And finally, I have to mention that despite the tiny size, the desktop does have its charms. A quick right-click on the desktop provides a menu entry that enables desktop effects - shadows and fading. They are actually just the xcompmgr program being activated graphically. This is the only distribution that I've ever seen with such options, even though they're fairly minimal. Either way, it looks awesome. 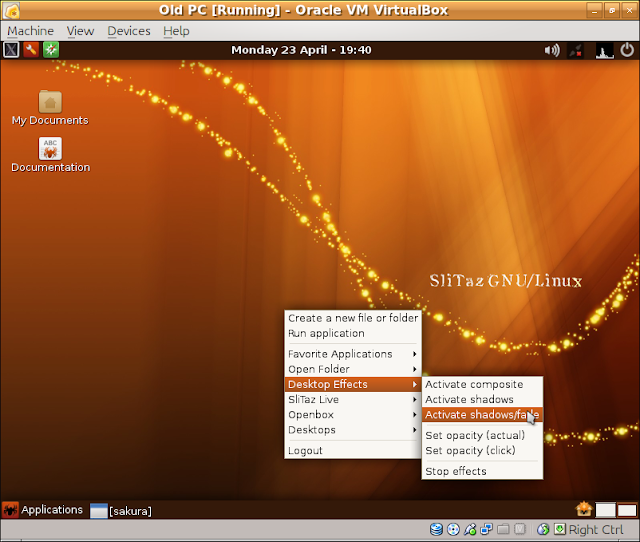 
I place Slitaz as #1 among the minimalist distributions, though it may not be the case for you. I hear that it does have less hardware compatibility compared to Puppy Linux, but it worked fine on the machines I've tested so I can't answer that. It does have a very thin selection of apps to choose from by default, but installing extra software is an easy task. I wouldn't exactly recommend it to a beginner, as the configuration can be a little tricky, but for a fairly experienced user, it can be a quite powerful tool.

This humble site received over a 500 views in less than 24 hours,  coming mostly from Distrowatch. Even though I didn't even request to be listed there, I guess I owe 'em some thanks!
courtesy of Klaus Zimmermann is not my real name