One reason to use Linux Mint over Ubuntu

This post will make heated arguments no matter what, so let me go ahead and shove the disclaimer in your face: I do not favor either Linux Mint or Ubuntu. If anything, I had more experience using Ubuntu than Mint, but I acknowledge both distros as great. That said, let's move on.

I recently went back into distro-hopping, getting to test several LiveCDs unknown to me before. The motivation was that my friend requested my help to fix his computer, and I decided to try new tools for the job. In previous distress calls, I carried with me two Rescue media: a USB drive containing Ubuntu 11.10 and a CD containing the latest KNOPPIX release (6.7 I think). I've always used the Ubuntu USB unless the Computer couldn't boot from it. It's faster, snappier and is overall simpler. However, with the recent popularity boost of Linux Mint shaking the Distrowatch hierarchy, I decided to finally bite the bullet and make a LiveUSB. And while I was at it, I also downloaded Fedora 16 and GhostBSD.

Here is the short answer:


Linux Mint is a much better LiveCD than Ubuntu.
However, for a full installation, Ubuntu wins.

And now for the explanations. My friend requested me to test three key things in his supposedly damaged laptop: the Wi-fi, hard drive health, and the webcam. Nothing 1337, really. Following standard procedures, and computer etiquette, I connected the Ubuntu USB and proceeded to check the BIOS. After changing the boot order, the Ubuntu Desktop showed up, detected everything I needed and I proceeded to check the devices. Wi-fi was detected out of the box as usual, first check mark. Using the Disk Utility, I was told the hard drive was ok. Check. And then, faced with the webcam, I had an epiphany.

Probably the simplest and most intuitive way to check upon a webcam in Linux is to run the program "Cheese" and check if it captures images correctly. The only problem is that Ubuntu doesn't ship with it by default. Not a problem, it's free software, and since we have internet access all we have to do is install it, right? Well, here's where it got complicated. Simply running 'sudo apt-get install cheese' wouldn't work, for the "Universe" repository wasn't being used by the LiveCD. Not a problem either, all I had to do was open the software center and enable the repository.

That done, I got back into terminal and try the command again. So, apt-get searches the repository, finds the dependencies, and what I'll have to download is... 54MB of files??? 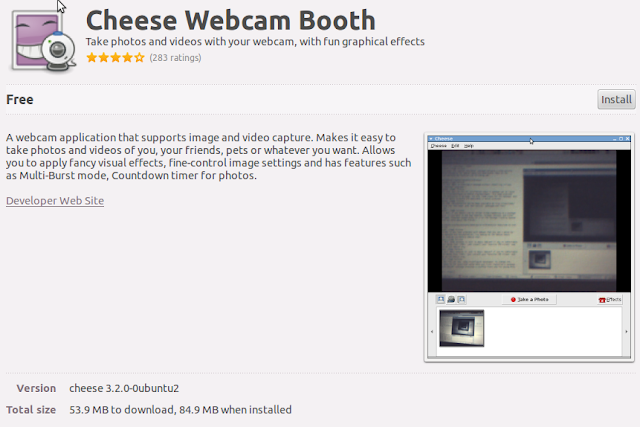 Yes, ladies and gentlemen, fifty-four megabytes. And by the way, the binary is a mere 641kB in size. What the fuck?

Turns out that because the dependencies for Cheese are not present by default, they have to be downloaded and installed. Now that's just great, under the shitty connection we have, it'll be a good fifteen minutes until I can begin to try to diagnose his webcam. I bit the bullet and hit 'yes,' but tripped on the power cord moments later, shutting the laptop down. Oh noes...

Staring at the black screen, and to the rest of my tools, I decided to bench Ubuntu and put Mint for the job for a change. Booting was standard, resembling much of Ubuntu's, and finally we were in. I had in mind that Mint packed a few more things by default, and looked to see whether Cheese was among them - it's not. So, off to terminal to install stuff. This time, however, I had a surprise.

Packing "a few more things" proved itself to be quite the winning hand. Though it may sound preposterous to try fill a Live Medium with everything ever coded, having popular dependencies by default made Linux Mint a much more flexible distribution from the start. Flexibility that means that a program in Mint takes only 6.4% of the download size that would be required in Ubuntu. That was the final blow - I decided that Linux Mint is my new rescue disk.


"Whoa, that was it? I think you're a shallow prick who gave up on Ubuntu way too easily."

You're entitled to your opinion. However, do not take that I'm done using Ubuntu - I'll explain later. Here are my main points for making this decision:
Linux Mint not only comes with multimedia codecs and flash by default, but also an arrange of common libraries that are popular dependencies in Linux applications. Ubuntu chooses to include them separately, labelled as non-free. And as for me, I am indeed willing to piss off Richard Stallman if that's what takes to get the job done much quicker...


What about a full installation?

Turns out that Mint's extra goodness has not succeeded in making me switch. Simply put, Ubuntu's lack of extra goodness also means less bloat for the full install. Once installed, you'll be able to build the distro your way. No need to try to have everything to begin with - that is the LiveCD's job. Also there are a few things that I find snobbish about Mint's policies:

Why do the developers have to - in their own words - "mintify" everything that already exists? They're not reinventing the wheel for chrissakes, just painting it green and silver. Due to their effort to shape everything their in own ways, the GNOME edition of Linux Mint 12 features a bug-ridden GNOME Shell interface, stuck right between the past and present: 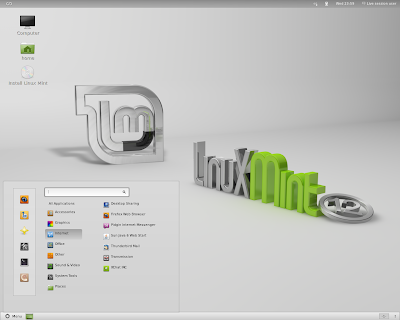 What, were you trying to bridge the gap between GNOME 2 and 3? Well, you failed.
There's a reason why interfaces evolve, and if you want GNOME 2 you must get the real GNOME 2, not a wannabe.

Ubuntu's legacy still is strong, but specializations exist. Mint's specialty is completeness, making it a more suitable LiveCD. However, this is not a reason to dump Ubuntu yet. There are still a couple of things that make Mint disgusting to me, and the snobbish looks is at the top. I mean... a partnership with a search engine called "Duck Duck GO?" Excuse me, I need to puke.

My friend's webcam worked flawlessly, and I diagnosed that his operating system sucked and told him to switch to Linux.

December 2011 by K Zimmermann
Contact me.
courtesy of Klaus Zimmermann is not my real name