Tibia is a great Game if you're a retard!

It is widely said that big things come in small packages. You probably heard it in some perfume store talk, as a means to justify paying a humble fortune for a volume of perfume smaller than a shot glass. Or maybe you said it yourself when your girlfriend complained about the size of the chocolate box you gave her. The only problem is that this sentence is a cowardish way of getting away with anything you wish. Oh, so the work I've done is way beyond the minimum? Can't fire me - big things come in small packages, yo! Fuck that.

Back in early 2000's, MMORPGs started to bloom. Everyone was into Ragnarok, looking for free servers, leveling their characters for big war events and recently-released Warcraft 3 was tiptoeing towards becoming an RPG itself. There was actually a wide range of games to choose from for the first time ever, like a golden age of MMORPGaming. Good ol' days.

And then there was Tibia, the oddball,
the retarded little brother of the family. If you never heard of "Tibia" except for the shinbone, don't feel bad. Really, DON'T. You're not missing anything great at all, but I shall summarize it just so we can discuss.
The MMORPG Tibia is a game created in the 90's, when computers had CRTs for monitors and ran Windows 9x. Back then, it was a 2D, scrolling world game and had simple, pixellated graphics, much like the  first Legend of Zelda titles. Unlike other MMORPGs, however, Tibia forgot to evolve together with the rest of the world, and remains pretty much unchanged to this day. Huge mistake...

While we don't need to play Apple Inc and release a new beat-the-shit-of-the-older-version product every six months and triple its price, it's generally agreed that as hardware gets better, software tends to follow through. And hey, it doesn't need to be some complete modification from head to toe: patch this or that, change the sprites, make better graphics... standard procedure.
Upgrading software is not anything new, especially when what it's related to the internet. And even so CipSoft didn't do shit towards adding something to its game. And what "Tibians" got today is still something like this: 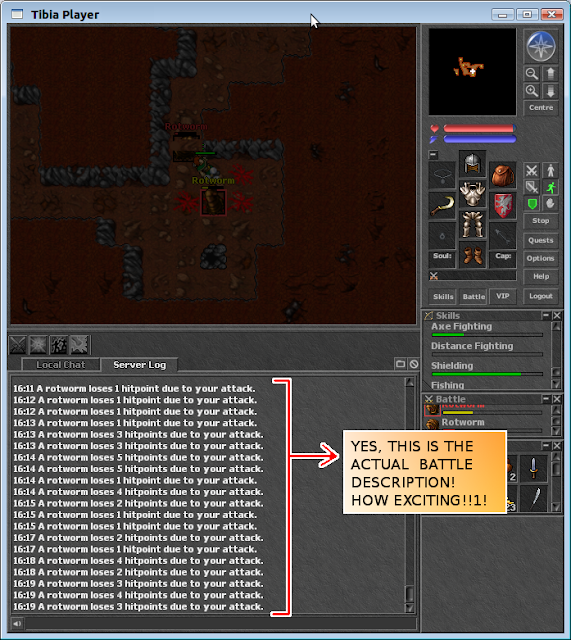 Don't get me wrong, there's nothing wrong with choosing a crap game to play. There is, however, in flaming other games, and it's this that pisses me off about Tibia players. They still think - despite the evident lack of popularity, unfairness, omnipresent cheating and not to mention the shitty gaming environment - that they're better than Runescape and WoW players. Woe us. 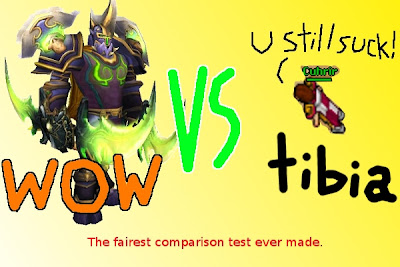 Let me make it clear: the only reason as to why I am calling this game a piece of shit is because I've already played it and it struck me so (yes, a stain in my honor. I will be forever marked as a noob for that!)
In fact this game sucks so hard that its players actually decided to modify it and create their own private servers to play as they wished. Like the workers took over the Kremlin, they cracked the game and made their own Open Tibia Servers.

Here are some of the game's best features:

1.Justice and Ethics
It's just so great how fair it is. You camel up and down in an Island completely naively until you're level 8. Then, excitedly, you migrate to the real world, just to be brutally murdered and raped by a gang of level 100+, stripped of all your equipment and live the rest of your Tibia life with your balls in your hands.

2.Fascist Money-talks regime
The standard account you use to play Tibia is Free and then there's a Premium one. Except that by using a free account you can only access 20% of all the game's features.

It's like every free account can only have access to the foundations of the game. You know, those posted back in the 90's in the first version of Tibia. The Tibia blog posts every single major update, like new monsters, spells etc, and then kindly puts at the end that will be available only for Premiums. Great shit.

3.Your effort in last place
Training in the game is ten times more of a burden than your job in real life. You actually start with all skills at 10, but in order to level up it goes like this: 5min to go to 11 from 10, 20min to 21 from 20 and then a whole fucking hour to level from 50 to 51. And then they wonder why so many people use macros.

This game signalizes that the end is nigh. It's Homo Sapiens's greatest shame. I think I'll link this to one of their forums just for the lulz.
courtesy of Klaus Zimmermann is not my real name