Linus Torvalds refused to work for Apple: so what?

I saw this article a couple of weeks ago but didn't care too much to post something about it. I've been seeing, however, a lot of praising still going on about this, despite being posted a good two weeks ago, and the actual thing happening more than a decade ago, which triggered my ranting muscles. In the article, OMG Ubuntu editor Joey Sneddon writes, and I quote:


[...] Imagine: no Linux would have meant no Ubuntu, no ChromeOS, and no Android; the entire ecosystem of technology could have been dramatically changed by acceptance of this one job offer. [...]


Say what? Hold on a second here: you're an editor for an Ubuntu-related news site, which explains mentioning it, but Android? ChromeOS? Both of these Google-made Linux-ISH operating systems have naught to do with mainstream community Linux, which by the way is the real Linux. Google gives jack back to what we know as Linux, and has a Frankenstein-like patched Linux kernel just to be able to call it Linux (a name that non-1337s are familiar with). So no, Google's projects wouldn't be doomed without Linus Torvalds working on Linux, they would just be delayed a couple of years more. 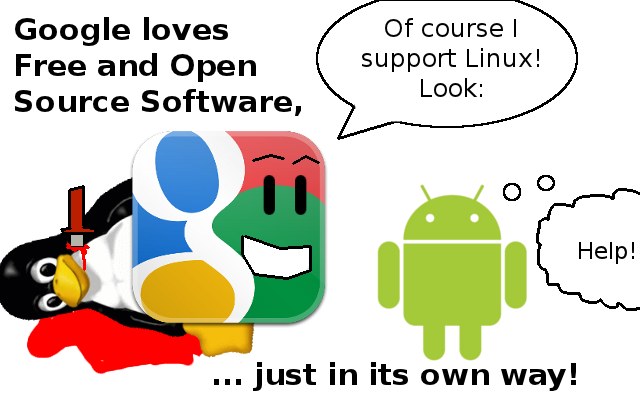 Also, why do people assume that with Linus Torvalds working for Apple, Linux would disappear? Must I remind you once again that the power of Linux is exactly the thing proprietary software makers lack - the community? Take one developer out of the pool, even a great developer, and there are twenty more to cover up for the gap. Don't believe me? Well, it already happened a couple of times - take Debian's founder, who ditched the project to work at Sun. And besides, this is a nobrainer: Linus was asked to stop working on Linux. It's not like he would close the Linux Foundation and delete everything on kernel.org.

The only certain thing that would happen if Linus Torvalds decided to work for Apple is that OSX would become slightly better - and only a tiny bit. Given his trolling attitude and the arrogance of Apple Inc, the constant clashes that would ensue in such environment would contribute very little to either side, if not damage them.

And finally, I'm fed up with how many people have commented about Linus's decision being some kind of "heroic" move, making him some kind of "idol." People, get a fucking clue already:

OF COURSE HE CHOSE TO STICK WITH LINUX. IT BEARS HIS OWN NAME.

The reason why Linus Trollvalds declined Apple's job offering was certainly not because of his duty with the community, and even less due to his commitment with the Free Software movement (he has none of that). It was because he would have to stop developing the kernel that bears his own name. Can't you imagine the game of pride that goes around these things? Something that is (or was, in this case) your creation and has your own name on it is at stake, are you going to give it up? Anyone with two bits of pride would say 'Hell no.' And besides, Apple was a broke ass company by then, who would trust them to get paid anyway?

I cannot understand why people found this 12-year old piece of news so fascinating and heroic. The guy refused to work at Apple, big deal. He had the decency not to be sold off to an opportunistic company, so what? Both players in this story are well on their own today, except for Steve Jobs. But again, maybe as they say there really is a better world after this one, right?