Transformers 3 is a disgrace.


Trilogies tend to start off as the shit, and end up shitty. Lord of the Rings was like that, and so were the Spiderman movies. Sometimes this happens because producers pack as much awesomeness as they can for the first one (since they don't know if they will make a sequel) that the latter come out watered down in comparison. This trend is not limited to movies, though. Many video games also suffer from that, just look at Valve Software's Half Life series:

However, other trilogies suck because, in the latter parts, the Producers decide to smoke some crack and scriptwrite at the same time, and what we get is a complete mess with no connections whatsoever. This is the case with the Transformers trilogy (which I hope never becomes a series), particularly with Transformers 3. Apparently, film director Michael Bay thinks that audiences have fish memory. That's the only explanation to why he throws in things completely unrelated to the plot, and thinks it will make perfect sense for the audience. Yeah, Michael, audiences will only remember the explosions, and the titties... not.

This was bad already in Transformers 2, which called in for a prehistorical contact between Cybertron and the Earth that went completely unmentioned in the first movie. So now we have a huge spaceship buried in the Moon that was just waiting to take over Earth? Wow, this planet Earth has got to be pretty damn valuable to make everyone want to take it! And frankly, this plot conflicts with the second movie, in which they wanted the Sun. What a bunch of greedy bastards these Cybertronians are! However, there were enough Railgun fire, College Freshmen sluts, and Megan Fox hotness in the second one that made the movie not suck completely. This also brings in my next point. 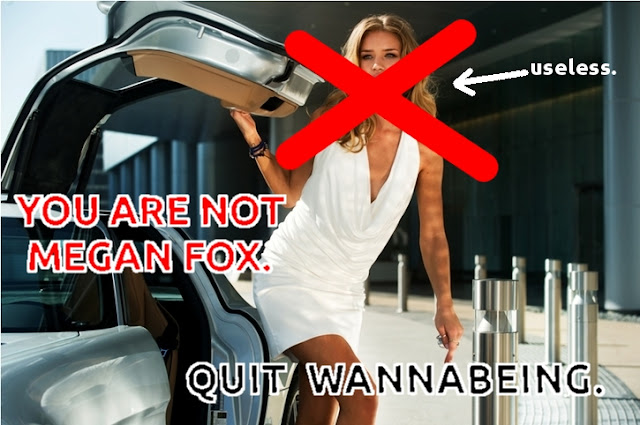 Why the hell wasn't Megan Fox in this movie? What, did the studio just run out of budget to hire her once more for the icing? Did Sam Witwicky learn how to be a douchebag in college, and dumped a broke bitch for one full of cred? I'm pretty sure that she was (at least) the eye candy for the dumb guys that were bored by a little bit of speech concerning the plot and just wanted guns and tits.

What you get in Transformers 3 instead is a skinny British Bitch that has diplomatic connections. Though still sexy, she lacks a very important point: Mikaela (Megan Fox's character) was also badass. I mean, she knew about cars, fought with Bumblebee's torso through the battlefield like a tank and was very independent. This new bitch not only is completely helpless and depends on Sam every time, but also doesn't do SHIT to fight the Earth invasion. Ok, she said: "You've been his bitch" but that was all. Oh wow, let's all applaud her for this immense feat!

Sam is also guilty in this one. Who is this guy now, a Corporate Dick-sucker? What happened to that badass who saved Optimus Prime from death twice while folding the Decepticon's Plan? So many acts of courage, national service and overall saving the planet, and he doesn't even get street cred. Photo with Obama? Check. Stable job? Nope. That doesn't seem to stop the man from rubbing in the face of everybody in his way how he worked with the armed forces, saved the planet, and knows confidential information. Too bad they don't give a shit about it.

Among the huge dump that was taken on the characters, and the addition of a completely random twist in the plot, this movie also lacked most of the good features of the previous. Now, things may be taken as long as something better steps in, but otherwise it's going to plain suck. It's as though the producers played jenga with the movie: let's see how many good features of the series we can remove and still keep it barely watchable! 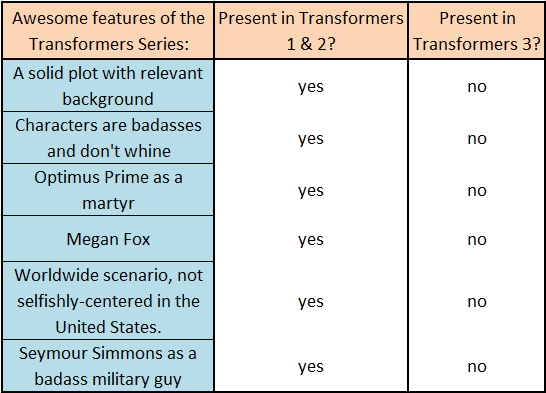 In short, if you thought Transformers 3 was anything above an "ok movie," you're either a crackhead, a goldfish or just plain retarded. Explosions were plenty, satisfying your needs should you be the latter.