So here's the article that everyone wanted, yet nobody made. It's like one of the greatest taboos in Linux. The huge elephant standing right in the middle of the living room that yet nobody dares to move. Gather around, children, for today I will share my thoughts on how is Ubuntu viewed by the Linux community. Is it flamed or loved? Will the GNU project twist their noses and finally embrace it or once and for all forsaken it?

First, let us receive some background information on the Ubuntu Operating System in the least possibly biased way - I'll try hard. So to begin, the obvious:

Ubuntu is by far the most popular Linux distribution, easily holding more than 50% of the user share. It's self-labelled as Linux for Human Beings, as the word "Ubuntu" itself means "humanity towards others" in a South African language. It aims towards being user-friendly and efficient, as though to attempt to break the geeky stereotype that haunts Linux. Ubuntu itself, however, is not a sole project - it's based on Debian Linux. It can be inferred that due to it's "out-of-the-box" configuration, overall easiness, and lots of prepackaged applications, Ubuntu has risen to the top in a fair way.

Now allow me to explain the not-so-clear issues. These are misconceptions about Ubuntu that need to be clarified, even though Ubuntu supporters tend to leave them aside.

Unlike the common belief, the concept of an out-of-the-box Linux distribution was not pioneered by Ubuntu. In 2002, distributions such as MEPIS and Mandrake (now Mandriva) had already attempted the feat, whereas Ubuntu would not be released until 2004. And let's not forget Red Hat, appealing to Businesses since 1997. Also, despite its website stating it's "Free and open source," it must be clarified that Ubuntu as a whole is not completely open source. Ubuntu developers built their own tailored version of the Linux Kernel - and ended up including pieces of software called binary blobs that are not free software.

Now, I hope that I didn't start a flame war by writing the previous paragraph. Since we have a (hopefully) unbiased description of what Ubuntu is, let's introduce the issues, the sources of quarrel.

Many people, when introduced to Ubuntu, are told that "this is Linux." A statement that is way too general to describe what Linux really is. The problem is that newcomers, when exposed to such statements, will not think that Ubuntu is Linux, but that Linux is Ubuntu. Now we no longer have a misconception, but a problem. This leads to masses of misinformed people that are there to criticize anything they find faulty on Ubuntu as a flaw on Linux as a whole. And you know that Ubuntu isn't perfect, just like any distro isn't. And since Ubuntu is targeted at a specific area of Computing (desktops), they'll close their minds to any other way that Linux could be used. With that in mind, please allow me to clarify one thing:

LINUX IS NOT UBUNTU,
you idiot!
UBUNTU IS LINUX.

Ahh! I feel so relieved now... Ok, back to the discussion.

Richard Stallman preaches the four freedoms of Software: freedom to use, modify, distribute and redistribute the software. Because many developers fail to cover all of these, true free software is scarce. It's at least natural that truly free Operating Systems are very few in numbers. Ubuntu, Debian likewise, is not completely free. Stallman adds that a true Operating System must not allow nonfree binaries to be installed as well - and narrows down the list of truly free OS to nine. Herein I see a problem.

An early cause of defeat in a game of chess consists in encirclement. Failing to expand and open your own defenses allows an opponent to checkmate you in as little as three moves. Likewise, forbidding nonfree software from being usable in Linux is a path to suicide. Software, regardless of it's kind, is always useful. Even viruses are - they educate users on how to use the internet. If programs such as Opera or Skype refuse to open their sources despite the demand, what are you going to do? They don't care; they are popular enough to state that their Linux versions are a gift, a favor from them and they can take it away whenever they want. But turns out that Linux-compatible versions work great, so why not take them?

The opposite, however, is not desirable either. Ubuntu almost markets itself as a compatible clone of all mainstreams operating systems in one. Its webpage even compares it to the iPhone! If you're going to make something from something completely free, don't advertise yourself commercially like that. It appears to me that Canonical (the company that develops Ubuntu) is attempting to play Apple and create the next "Switch to a Mac" campaign. The day I turn on the TV and hear "Hi I'm Ubuntu. And I'm a PC," I'm shooting myself in the face. Wait, that may be earlier than I thought - Ubuntu now has a MUSIC STORE too. Take that, iTunes! 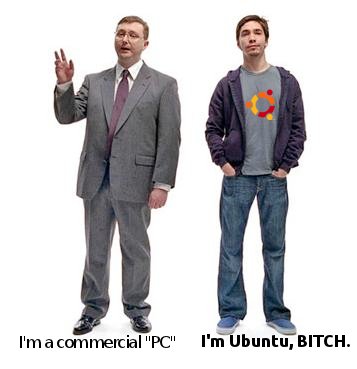 The ideological impact that Ubuntu causes in the community is also an issue. Ubuntu, if anything, is closest related to Linux than Windows or Mac. So why is there documentation on switching from other Linux distros to Ubuntu? Is Ubuntu trying to make itself "superior" by any chance? The immense popularity of Ubuntu has created a virtual (but very distinguishable) niche within the Linux community. Anything related to "just working," new looks, and overall silly stuff has to go there first before reaching the rest. Remember Compiz? Ubuntu sacked that. And if you don't agree with "silly stuff," then why is there a website called OMG! Ubuntu? Is every Ubuntu user a dumb blonde?

To conclude this post, I'll list some of the flaws in the Ubuntu philosophy that need - in my opinion - an urgent fix:

1."Just works" is great, but it's not everything
By justifying your system in its perfection, you will be heavily criticized if anything happens to fail. In a world with no mistakes, how will people deal with some misfortune that happened? Also, it bloats the system by packing stuff that an entire community needs, but not a given individual.

2.Regardless of your ego, you still are Linux
Canonical shouldn't advertise their product as something ahead, superior to Linux when in reality it is no different. If you want to reinvent the wheel, don't just make a better wheel.

3.Don't preach a religion or start one
Ubuntu is great, works fine, but should not become the single face of Linux. Remember: the freedom of choice between Linux flavors is just as important as the choice between Windows and Linux.

With those said, I still think that Ubuntu has done more good than bad for the Linux community and the Free Software Foundation. If anything, the popularity gained alone is enough reason to accept it.

For more information on the flavors of Linux, please see below:
Distrowatch
courtesy of Klaus Zimmermann is not my real name