Your IT guy is shit, and so is mine.

One of the greatest aspects of the information age and technological innovation today is the concept of the  'cloud.' The cloud allows you, me and everyone else to change work into network so we all can work as one big mind in the office. If you cannot access or work in the cloud, then I can only presume that you don't belong in the very room you are working right now. - IT guy next door

These more-or-less verbatim words were spoken to me by the IT guy at my job yesterday. He was probably trying to instruct me on how to cooperate with the guidelines of office Internet usage, or failing to. And I was feeling lucky as hell that he doesn't happen to be my boss (actually he's his own, as no one else takes on the IT department since they actually have a life) and I can blame him for the work not done due to technical incapacitation.
Now, the above quotation might startle you to ask me to what proportions was the shit that I did in order to receive such lecture, and I will save you your stinking precious time. The lecture quoted above came after I called said IT guy because I could not open some documents stored in a shared folder of my department. He came in, proceeded to try to open said files exactly like I did and then stopped, thinking for a second or two.
Then, very cleverly, he switched to the desktop and thoroughly analyzed every single icon there shown, gathering information to formulate his frustrated and incredibly intelligent rant on me:

"There. See? Look how much stuff you've installed here. Don't you know how dangerous blindly downloading things can be? No wonder every other computer here is able to open files when yours can't!"

Ok, so I ain't no Pope, Samaritan or deity, as though no one knew. I download things, obviously! I download things when and where I'm allowed to, thats the beauty of the world wide web! But let one thing be clear:

You heard it right, Mr My-wife-is-my-PC, even people under 21 are aware and follow a certain ethics code.  That is especially true when it involves money, health, sex or getting a day's pay for free because your work is crippled by the incompetence of the tech department. You may be asking now what was there in the desktop to raise such anger in the poor geeky nerdy man's heart. I'll let you see for yourself*: 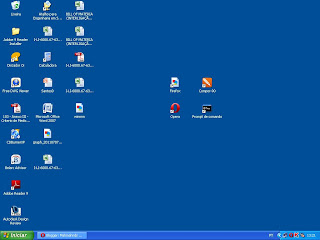 *Missing in the picture are: Mozilla Thunderbird and a couple of spreadsheets

So what's so horrible and threatening in this desktop, besides the menacingly boring blue wallpaper? Did I happen to get hacked through one of the pictures or spreadsheets? Oh noes! Bad, bad intern!

IT guy then says that the shit I threw in the fan was the couple of non-microsoft programs I installed, seen in the right side. WHAT.

Non-Microsoft is meant to be read "Non-retarded" and "superior" simultaneously. For example, when you have a new computer just hooked up to the internet, what do you do? Download firefox! The only reason why OpenSource is still unpopular is because the average computer using monkey is too lazy to find it.

But no, IT guy - emphasis on IT - will not understand such fact - he's a robot! And so the opening lecture is stated, followed by me forced to uninstall all the freedom good programs. Facepalm. Reminds me of the "wrong password" screen that linux shows when you supposedly failed to probe into your boss's account;

I have, however, just to piss him off reinstalled Opera and put a dummy Firefox Icon since then. What... I know for a fact that I can't bear using IE7.
courtesy of Klaus Zimmermann is not my real name